Last Updated by Ricardo Sandoval-Palos on 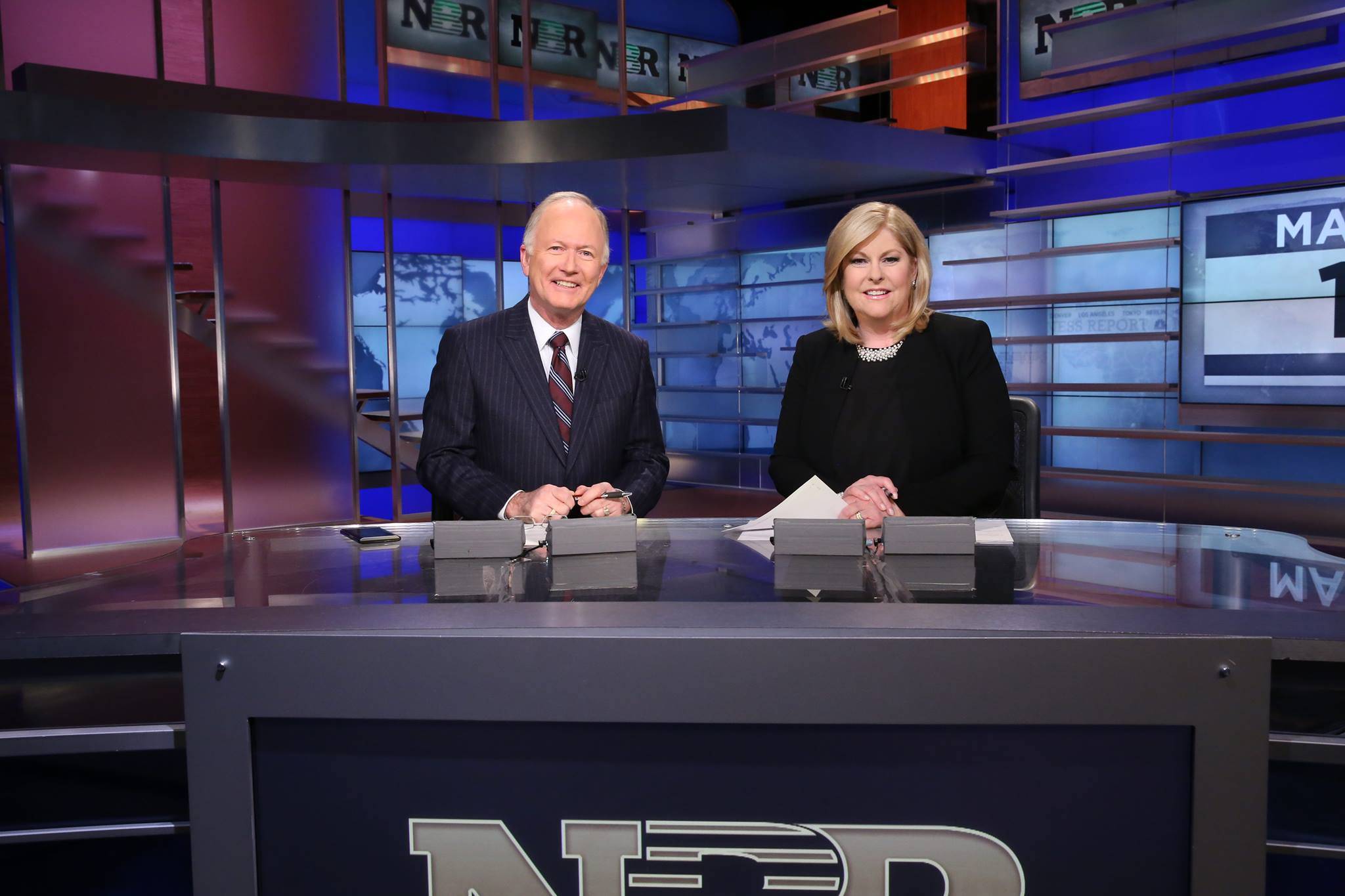 Since 1979, the Nightly Business Report was the decidedly unsexy character in the financial news genre of television.

The public broadcasting pioneer — the first financial news show on television —? wore its sober, straight-shooting approach on its sleeve. But the show’s owner, cable TV’s CNBC, pulled the plug and left scores of viewers wondering what happened.

For more than 40 years, and until the end of 2019, the Nightly Business Report methodically, dryly, presented news stories on the day’s most important financial and economic topics. Some 96 percent of the nation’s televisions received the NBR signal, via at least 180 public television stations across the United States.

NBR’s no BS, straight-forward approach to financial news irritated some viewers perhaps more accustomed to bat-swinging pundits who smash coffee cups and yell at each other over hot stocks or the merits of tariffs and tax breaks. A minority of viewers called the show a sellout to corporate interests because it steered clear of stories that might reflect poorly on Big Business. But the sober approach is why public television audiences showed deep love for NBR since it went on the air in 1979, first as a local broadcast on Miami’s WPBT, and then nationally after it was acquired and reacquired by a series of national distributors.

Dozens of fans have reached out to PBS, to the Newshour and to local public television stations over the last month, angry that NBR signed off for good Dec.?27, 2019.

Confusion, But the Good Kind

The show had been on public television for so long that many in its strong audience came to believe it was produced and delivered by the Public Broadcasting Service. The confusion is understandable. Fans like Cliff Stone of Huntington Beach, Calif., have vented at me:

Who exactly were the total MORONS at PBS who decided to discontinue the extremely POPULAR and widely watched The?Nightly?Business Report ???

And that’s OK. I believe this is why I am here. I am the point of contact when you don’t have a show’s executive producer on speed dial, and you don’t know why something’s gone awry with your favorite show.

The Alphabet Soup Behind NBR

Let’s start with a reminder: PBS is not a network like NBC, CBS or ABC.

PBS is a system — a digital platform if you will — that provides broadcast space and distribution for talented journalists, producers and entertainers from around the nation and the globe.? Their work is shared with local public broadcast stations across the country. Those stations mix their own public affairs and community programming with the national and international shows supplied by PBS and other public television distributors. Yes, PBS is not the only player in the public television space.

I am pointing this out because NBR was actually distributed to public broadcast stations by American Public Television, which handles hundreds of public television titles, from America’s Test Kitchen and Rick Steve’s Europe, to Doc Martin and Japan’s NHK Newsline. I have APT to thank for Monty Python’s Flying Circus, introduced to U.S. audiences in 1974.

NBR was presented by Virginia’s public TV giant, WETA, which also runs the PBSNewsHour. But NBR was actually owned by CNBC. That broadcaster, in turn owned by NBCUniversal and Comcast, bought public television’s pioneering business news show in 2013. NBR was the longest-running U.S. business news show. It was the on-air financial report?before cable TV spun jazzier Wall Street coverage on CNN, Fox and Bloomberg TV. A series of suit-and-tie anchors hosted the newscast and brought and introduced to audiences such nerdy experts as Alan Greenspan before he became “The Fed.”

So why am I writing about the non-PBS Nightly Business Report?

I believe it’s important to acknowledge the dozens of strong NBR fans who took time to share their concerns with me about the void left by the unplugging of NBR.

? ? ? ? Whoever was responsible for this decision did not consider it's [sic] popularity with the majority of fans who support PBS. Shame on the executives who arrived at this decision.?— William Grahl, Shawano, Wis.

PLEASE bring back Nightly Business Report to PBS programming in 2020 or 2021. I started watching a year ago as novice business and stock market layperson. It was informative, educational and had great guests who had success in stock market. Because of a great money manager’s tip in 2018, my mom and I purchased low cost healthcare etf that has been profitable since 2019. But it also educated me about parts of the economy I wasn’t familiar with like housing and its effects on today’s economy in simple, straightforward way that I as a layperson could understand. I was looking forward to educating myself more in business and the stock market in 2020 when I found out it had been cancelled.” — Louise Hung, Fullerton, Calif.

The show’s reach and the strong feelings of its many fans was not lost on APT executives.

“ … NBR?has been an important resource for audiences and we have been proud of its many accomplishments and continual praise,” APT President Cynthia Fenneman said in a statement issued upon the show’s demise.

“Just last year, APT awarded the series with its Program Excellence Award,” she added, “congratulating?NBR?and presenting station WETA for their delivery of credible, well-produced, unbiased information to help business executives, financial professionals and the general public manage their business or personal finances. This is smart television which will be deeply missed.”?

Business journalism has always been important to me. I cut my journalistic teeth covering agri-business in California. I became an investigative reporter in order to expose crooks like Charles Keating, who in the 1980s, took control of many savings-and-loan associations in order to take customers’ federally-insured deposits. When those scammers left (or went to jail), taxpayers were forced to pick up a good portion of the government’s responsibility for FDIC-insured savings accounts.

Like many viewers, I became curious when I heard that NBR was going off the air. I discovered it was due to stone-cold business factors, but also because Bill Griffeth, one of the founding fathers of CNBC, and NBR’s anchor, was stepping away from daily journalism.

The answer is “yes,” at least from APT. The distributor’s spokesperson told me there are indeed preliminary discussions to put together a successor to NBR. What the show will look like, and who will helm its microphones and stock tickers, remains unknown. ?

I am optimistic there will be a solid financial news show to replace NBR. There is definitely space for it on public television, and an audience appetite for plain-talk business coverage. We need more shows like NBR, not fewer. We need sober, professional journalists to explain to us what the heck is happening on Wall Street, a place that’s a mystery to many, or even on Main Street, where so many of us see the impact of global and national financial trends.

For the moment, we’ll remember NBR by quoting one of its iconic anchors, the late Paul Kangas, who signed-off each night by wishing us “ … The best of good-byes.”

ABOUT THE PUBLIC EDITOR
As public editor, Ricardo Sandoval-Palos serves as an independent internal critic within PBS. He reviews commentary and criticism from viewers and seeks to ensure that PBS upholds its own?standards of editorial integrity.?Read More >
?
SUBMIT YOUR COMMENTS
Have a comment related to the journalistic integrity of PBS content??Send an E-mail?to Ricardo?or contact him at 703-739-5290. You can also follow the public editor on Twitter @PBSPubEd.
?
The public editor does not replace viewers' long-standing ability to contact stations, producers and PBS.
?
If you have a comment related to PBS website design or user experience, please contact the?Audience Services team.

Thinking Outside the Bubble

NPR Public Editor Elizabeth Jensen reflects on audience concerns she's heard over the last 5 years as she wraps up her tenure there. One she heard consistently was the complaint that NPR's coverage focused "far too much on Washington, D.C., and the largest East and WEst Coast cities, and not nearly enough on the non-coastal rest of the country.

Public Media Needs to Step Up Its Game in Leadership Training

Public media must do more for its employees’ professional development, writes Deanna Martin Mackey in Current. Mackey is president and executive director of Public Television Major Market Group, a consortium of the nation’s 40 of the nation’s largest public TV stations by market size.

Do you live in a ‘news desert’? The University of North Carolina’s Hussman School of Journalism looks at the growing gaps in news coverage left by the closures of local newspapers around the country.

...more on 'News Deserts' and what PBS can do about them (older coverage)?

Against the growing phenomena of news deserts in the United States – areas where local news outlets have failed or have been gutted by the loss of ad revenue – PBS is being called upon to act. One suggested remedy is overhauling the way the Corporation for Public Broadcasting issues grants for public affairs programming, from a Washington, DC -based metric to spending decided by local news producers.?...